December 4, 2014 (IRVINE, Calif.) This past Tuesday was a wet and wild day at Buttonwillow Raceway Park with eight championship-level club racers chasing a $100,000 scholarship package, the largest prize in all of grassroots motorsports, at the annual Mazda Club Racer Shootout. 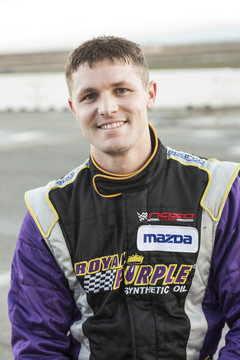 Despite a year of record drought in California, most of the day was run in pouring rain.  How wet was it?  None of the drivers ever had the chance to lap the course on the BFGoodrich g-Force R1-S slicks.  All sessions were conducted on BFG rain tires.

At the end of the day, after the pavement had dried, Kyle Loustaunau, from Vacaville, California was judged to be the best of the best among Mazda-powered club racers in 2014.  Loustaunau had won the 2014 NASA Western States Spec Miata Championship, earning his eligibility for the shootout.  He will now have a scholarship budget to compete in the 2015 Battery Tender Mazda MX-5 Cup Presented by BFGoodrich Tires.

Kyle Loustaunau – “Over the past three days I've had the most amazing experience of my life. This is both an honor and a privilege to represent Mazda and I can't wait to get started. It has taken help from a lot of amazing people to get here and I can't thank everyone enough.”

John Doonan – Director, Mazda Motorsports – “Mazda Motorsports is the leader in grassroots roadracing.  This leadership has given us opportunities to do things that no one else has done.  Our Club Racer Shootout has become a signature event for us and represents an amazing opportunity to help racers move from the club level to the professional ranks with a solid support program around them.  We expect Kyle to have a great season in the 2015 Battery Tender MX-5 Cup and hopefully many more years with Mazda.”

Charles Espenlaub – Head Judge - “Every year the Mazda Club Racer Shootout just gets better and better.  Having been involved since the beginning, I am continually amazed at the talent level that the Mazda champions bring. As the landscape of racing changes so does the competition on and off the track.  This year we had another twist, with heavy rains the conditions were extremely difficult. This added to the challenge and as always made for a difficult decision as to who would win the coveted prize. Everyone did an outstanding job and put in efforts worthy of the champions they are.  As in the very competitive Battery Tender Mazda MX-5 Cup the winner can be decided by a few tenths of a second.  Kyle Loustaunau was able to top the field by showing well in multiple categories all of which should provide success for his climb up the ladder.”

Peter Calhoun – Motorsports Manger BFGoodrich Tires - "The Mazda MX-5 Cup Shootout annually showcases the brightest talent from the North American club racing championships. Giving each of the drivers the opportunity to win the richest prize in club racing by demonstrating their driving, business, and social engagement skills.  Each year BFGoodrich is honored to participate in the Shootout alongside our friends from Mazda in a show of support for grassroots racing, which is a core ingredient to both our motorsport programs. Congratulations to Kyle Loustaunau on winning this year's Shootout.”

The eight shootout finalists were:

The criteria: Given that each of the finalists had proven themselves on the track by winning a championship, the criteria to move up needed to be more encompassing.   To succeed on the professional level requires a balance of both on-track and off-track skills including the following:

·      The business of motorsports – Business proposal

·      The business of motorsports – Business presentation

The judges: Each year Mazda invites a panel of outside judges to make the selection.   The judges brought a wealth of both on-track, and off-track expertise.  More than a dozen professionals were involved in either the preliminary business proposal review, on-track activities, or both.  The panel consisted of:

The tally:  After a day-and-a half of both driving, and classroom activities, the judges added the objective and subjective scores -- discussing the merits of each driver.  The judges deliberated carefully before declaring Kyle Loustaunau the champion.

About Mazda, Mazda Motorsports, and MAZDASPEED

Mazda is a leading player in all aspects of sports car racing with an emphasis on endurance road racing.  Mazda is the number-one brand for road-racers across North America among both club racers and professionals.  Thousands of Mazda-powered grassroots racers compete in various classes with the SCCA and NASA highlighted by Spec Miata, the world’s largest spec class with over 2,500 cars built.  Via the Mazda SportsCar Racing Academy, Mazda supports racers at all levels of the sport from club racing up to the TUDOR United SportsCar Championship where it races with production SKYACTIV Technology.

Mazda remains the only Asian car company to score an overall win at the 24 Hours of Le Mans (1991).  Mazda has had a naming rights agreement at Mazda Raceway Laguna Seca since 2000.

Mazda Motorsports is managed by Mazda North American Operations (MNAO).  MNAO is headquartered in Irvine, Calif., and oversees the sales, marketing, parts and customer service support of Mazda vehicles in the United States and Mexico through nearly 700 dealers.  Operations in Mexico are managed by Mazda Motor de Mexico in Mexico City.