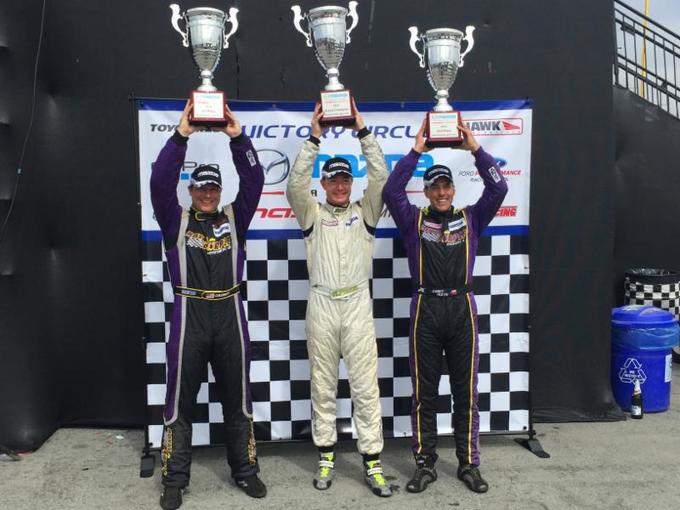 Rueth and Croiset round out the Grand Champion podium

Rueth was the early leader as Matthew Powers, Jeremy Croiset, David Ziegler (Baltimore, Ohio) and Ben Anderson (Minneapolis, Minn.) followed in a five car Mazda MX-5 train. On lap five Powers passed Rueth for the overall NASA Champions lead. Powers continued to lead through the one-third distance of the race. The top three NASA drivers were running near identical 1:45 lap times. On lap 11 Chi Ho (Orlando, Fla.) spun in Turn 10 and hit the wall bringing out the races first and only caution period. On the restart on lap 16, Croiset was able to take over second position from Rueth. On lap 19, Croiset, running in a 10 car pack, was able to take the overall NASA Champions lead going into Turn One at the 37-minute mark. Croiset, Powers and Rueth were running nose-to-tail for the final 10-minutes of the event. On lap 22 Croiset got caught in traffic coming down from the Corkscrews and got relegated to third place as Rueth and Powers took advantage of Croiset's delay. On the final lap Powers managed to get by Rueth to take the NASA Grand Champion crown.

The win gives Powers an invite to the Mazda Club Racer Shootout in November. In addition to being the 2014 NASA NorCal, Western States Champion in his GTS4

Class BMW M3 he can also boast about being the first ever NASA Grand Champion.

"Great race," Powers exclaimed. "It was really simple for the first 30-minutes and then that yellow came out. It became a whole different race on the restart. I am just happy to have the car in one piece and at the front. It was a fantastic race. I really appreciate everyone from Mazda and NASA who put this great event together. There are some great drivers here. It was an awesome battle. I knew there was something going on with Jeremy and Corey. They were really battling. Jeremy tried to make a hero move and I was able to capitalize and take the win."

Rueth is the Eastern States Champion in his Spec Iron Mustang and finished second in the No. 27 Mazda MX-5.

"That was absolutely the best race of my life," Rueth said. "I've never had more fun in a car. I was having so much fun at the end of that race that I didn't care if I won. OK that is a lie. I had the best time. I want to thank Mazda, NASA, SCCA and Skip Barber Racing for a great event. The hospitality has been wonderful and it really showed me how a professional event is run. I am absolutely inspired. I am going to buy a Mazda when I get home. I was leading the race and Matt made a fantastic pass. He was racing like a true gentleman. So I fell in behind him and drafted a while. He got caught up in traffic in Turn 10, he went inside, I went outside trying to pull the hero move and I went into the dirt. I put the accelerator on the floor and prayed and drove it back on the track after Turn 10. I have to pass about 100 cars to get to back to Matt. I am happy to be on the podium today. Proud to be racing with these drivers and the NASA organization."

"It was really clean racing," Croiset said. "Some of the best and hardest racing I have done. I got a decent start and I let things play out running in the top three. After the full course caution it was mayhem, every man for himself. I had my radio slip out of the dash and it was at my feet. I ended up throwing it in the back and focusing on the race. The end of the race was fantastic. I tried to stay as clean as possible, there was great action between the top five cars. My hats off to the NASA racers, everyone did a great job all weekend."

Putting his sponsor hat on Croiset was happy with the cooperation of everyone and as well as the driving prowess on the track. "The action was more intense than anything I have ever done in my life. The racing was closer than I could have imagined. I can't say enough about Mazda, NASA, SCCA and BFGoodrich for putting this event together. This really showed that the cream of the crop in NASA rose to the top. I think we had one of the best races of the weekend, which is a testament to the NASA ladder program. I want to thank John Doonan from Mazda for his vision and support." 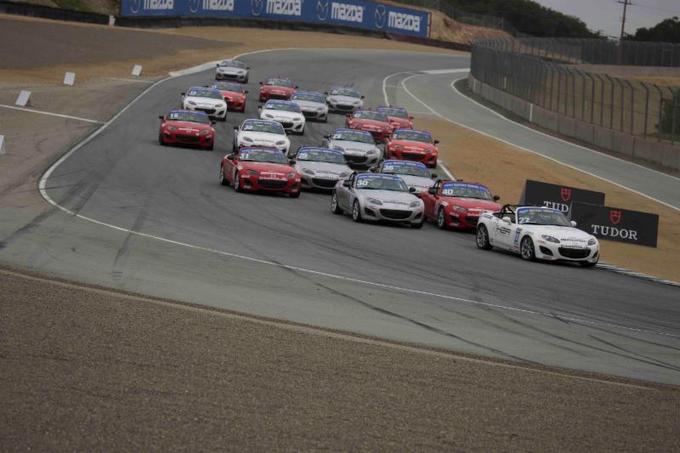 The National Auto Sport Association (NASA) was formed in 1991 with the premise of delivering high-quality motorsports events to enthusiasts at major racing venues throughout the nation. NASA has created programs that allow owners of both racecars and high-performance street-driven vehicles to enjoy the full performance capabilities of their cars in a controlled professionally managed environment. NASA offers many different programs that will allow you to enjoy motorsports on a number of different levels, including our High Performance Driving Events (HPDE), Rally Sport, Time Trial, NASA-X and Competition Racing programs.

NASA members are entitled to enter and participate in any NASA event across the country, and membership includes an array of benefits, including vendor discounts and a subscription to the organizations online newsletter the NASA Speed News. Members will also receive a colorful membership hard card that will identify them as part of the organization and a welcome packet that includes more information on the many benefits and programs available to NASA members. While participating at events, all NASA members are covered by an extensive insurance policy, which includes General Liability, Accidental Death and Dismemberment, and Excess Medical coverage. Best of all, membership is only $45. Refer to www.nasaproracing.com for member information.

NASA Thanks Our Partners

NASA at a Glance

* NASA was founded in 1991 on the premise of providing motorsport competition programs that allow owners of both racecars and high-performance street-driven vehicles to enjoy the full-performance capabilities of their cars in a safe and controlled environment.

* The NASA National Championships will run 36 race classes and nine Time-Trial classes during the event.

* NASA runs over 150 events each year encompassing over 250 races, including the association's Rally Sport and Time-Trial program.